March 22, 2021
The Nigerian Military says Dikwa, a town located in the central part of Borno State, is not yet safe for citizens to return, weeks after Boko Haram terrorists who came with more than 20 gun trucks mounted with anti-aircraft guns, launched an attack. 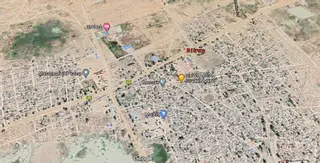 The terrorists had also razed some public buildings, including primary health care, local government secretariat, part of Shehu of Dikwa palace and a United Nations hub.
Speaking in Abuja on Monday at the two-day Northeast symposium on Reconciliation, Resettlement and Reintegration organised by Centre for Humanitarian Dialogue, the Coordinator of Operation Safe Corridor, Maj.-Gen. Bamidele Shafa, also dismissed that the military re-integrated deradicalized terrorists into the society.
“I need to clarify something. Operation Safe Corridor does not re-integrate. I want to say that again, Operation Safe Corridor does not re-integrate. We de-radicalise, rehabilitate by applying the various therapies that have been put together by the ministries, departments and agencies, experts from them, with the collaboration and supervision of our international partners,” he said.
There have been accusations from various quarters that the military is responsible for bringing back deradicalized terrorists back to the society whom Borno State governor, Babagana Zulum spied on citizens and went back to their criminal spot.
But reacting during the symposium, Shafa said, “I must say it here that the government and people of Borno State have been up and doing, in seeing to successful re-integration of their clients, apart from the last batch that was taking to Dikwa.
“And we all understand that Dikwa is a hot spot now, and it would be dangerous to return these boys back into Dikwa. And that is why the military commander on the camp, in conjunction with the ministry of women of affairs, returned these boys back into Sokari camp until such a time that the situation will be conducive enough for them to return. They were not rejected. I also need to put something out very clearly,” he said.
The country Manager of Centre for Humanitarian Dialogue, Mrs Lewis Ojumu, in an interview with journalists said the organisations and other Non-Governmental Organisations are keen to see the end of terrorism in the country.