July 19, 2021
Aloy Ejimakor, Counsel to the leader of the Indigenous People of Biafra, IPOB, Mazi Nnamdi Kanu, has revealed that the later now preaches unity and tolerance while in the custody of the Department of State Services (DSS). 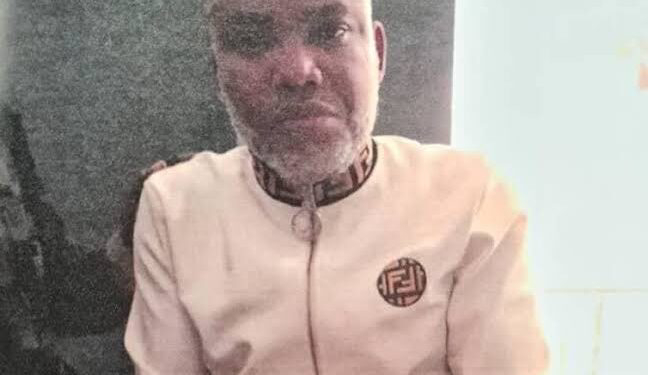 Kanu was re-arrested on the 29th of June, expatriated to Nigeria to face trial for alleged treason. The IPOB leader was first arraigned on 23 November, 2015 in an Abuja Magistrate Court by DSS.
Born in 1967, Kanu founded IPOB in 2014 with the aim of achieving a sovereign state called ‘Biafra’.
However, on 28 April 2017, Kanu was released from prison on bail. Reports had it that Kanu allegedly jumped bail after a military action, code-named “Operation Python Dance”, allegedly targeted his family house in Abia state.
Three years after, Mazi Kanu was re-arrested in an African country and was brought back to Nigeria to face charges leveled against him.
Reacting on Sunday, Aloy Ejimakor via his twitter handle opined: “Today, I met with Onyendu at the DSS. We spent nearly 4 hours. My interaction with him was fulfilling.
“He’s cheery & looks forward to overcoming this predicament sooner than later. Again, he stressed UNITY and tolerance on all sides. He has you all in his thoughts”.
Recall that Kanu had been advocating for the freedom of Igbos.